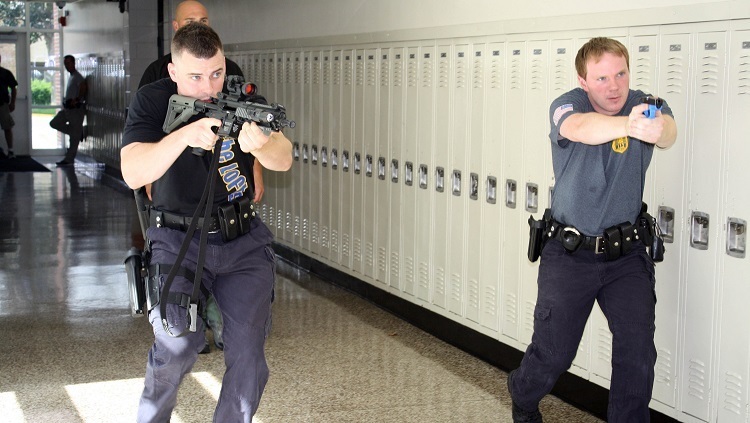 What to Do in Active Shooter Situations

Since active shooting situations tend to happen more and more in the last decade, the best way to protect you is to learn how to act in this particular scenario. The best advice that we can give you is to be mildly paranoid so that you can reduce the chances of being caught in the crossfire.

Even though it is a grim topic generally, and the odds that you are going to become a victim are low, the number of them rose from the beginning of new millennia, which is why you should know how to react and respond.

Everything is based on three critical guides: fight, hide or run. Of course, everything depends on the location and specific situation, which is why we cannot provide you a general rule for it.

Best survival courses, such as the one you will find on this link: https://athena-security.com/active-shooter-training, are based on actual cases that already happen.

More prepared you are, you will have higher chances for survival in the end.

The best way to survive anarchy is to understand the rules you have to follow. In these particular situations, these protocols can mean a difference between life and death, which is the main reason why you should think everything through.

Be Aware Of Your Surrounding

It is essential to understand that you should react from the moment you hear the first sign of a problem. Beforehand, you need to adopt the habit of checking out the exits, fire escape protocols and determining the escape route from your current location.

At first, it will be artificial to think like that, but as time goes by, you will do it by default, which is the main goal that you should achieve. For instance, most people from law enforcement do that mechanically, without thinking about it.

It may seem like paranoid activity, but it will save you in case something happens. For instance, when you decide to go to some public gathering or event, you should stand next to an escape route map if there is or check out for signs that will explain to you where to go.

That is just a few seconds of your time, and it may help you survive in the next moment. The idea is to program yourself to avoid forgetting that you should analyze your surroundings wherever you are.

Even though you have numerous responsibilities and filled head with future tasks, it is vital to avoid daydreaming while entering some commercial buildings or malls and start implementing these tricks that will help you.

You should click here to learn more about history of mass shooting in the USA.

As we mentioned above, the first ten and maybe twenty times it would have to be something you think through. However, afterward, you will be able to analyze the closest exit while hanging out with someone, which is the primary goal of active shooting survival training.

The problem lies in the idea that you have to synchronize all the knowledge you obtained when it comes to survival with current information, which depends on the context. Each shootout comes with a unique situation, so we cannot tell you what exactly you should do.

We can only help you decide better and avoid common mistakes people make in these situations. For instance, if the shooter is standing in the middle of the exit and yourself, you should choose an alternative way to run.

In all situations, it is vital to remember that you have to get away from the shooter as much as you can. That is the best solution that you can make. In case you are on a higher floor, avoid elevators, and always take stairs.

On the other hand, if you are located on the first or second floor, you should escape from the window when you get the chance. Even if you hurt yourself on the way down, it is much better than being dead from the bullet.

As soon as you enter the line of sight of a shooter, you should run from cover to cover or in zigzag.

At the same time, you should avoid pulling the fire alarm, because that will create additional confusion, some people will think that it is just a drill, while others will panic and create even bigger havoc.

Instead of doing anything that will cause a reaction from shooter and panic from hostages, you should yell gunman or gun. Most places including schools and workplaces tend to implement drills to educate students and employees what to do in case of evacuations or lockdown,

However, if you are visiting some events such as the cinema or theater, you should familiarize yourself with the closest exit.

Most commercial buildings feature signs and maps that will show the closest way out, and the main problem is that people do not pay attention to them, which is the main reason for the inability to rescue them afterward.

Where Should You Hide?

If you cannot escape, the next best thing that you can do is hide. However, it is much better to say, and you should deny access to a shooter. It means that this particular form of hiding is not passive like lying down on the ground or beneath a table.

Instead of hiding and hoping for higher forces to save you, we recommend you to adapt the technique called active hiding. It means that you should find a room or place that you can lock down, or create a barricade that will prevent a shooter from breaking inside.

For instance, you probably did not know that the most secured room is the one closest to the elevator because they tend to feature additional, reinforced construction, which is much better than drywall.

The worst thing that you can do is to hide under the desk because then you will be a clear shot if a shooter finds you. Therefore, you should find ways to remove yourself from the line of fire. It is much better than waiting and doing nothing.

At the same time, playing dead is another mistake people usually make, because shooters are most likely to fire into wounded people on the ground too.

Why is the reach of people in ICICI prudential banking increasing

Six Useful Security Systems Your Business Must Have

Ways Of Protecting Your Business Against Cyber Crimes

SamGerrald Nov 14, 2022 0
Are you in your final year of high school? Or are you planning to pursue a course to develop your career? Well, you…

The Cost Of Downtime In Manufacturing

15 Tips to Help Your Business Weather a Recession

The Definitive Guide to DA and Contconcord Checker Tool

Jul 23, 2022
Domain authority is a valuable metric to consider when you're thinking about where to invest your time and energy…

A Guide to Small Business Accounting

Jul 21, 2022
There once was a time when the small business owner would meet with his bookkeeper once a week and hand him a heap…

Why the Laptop Industry is Growing Fastly

May 23, 2022
The laptop industry is growing at an unprecedented rate, especially in Asia-Pacific. Various government initiatives…
Sign in
Sign in